Exhaling for 10 seconds for all adult patients is one of the most important steps in FeNO testing. This article looks in detail at why this timing is so central to success. 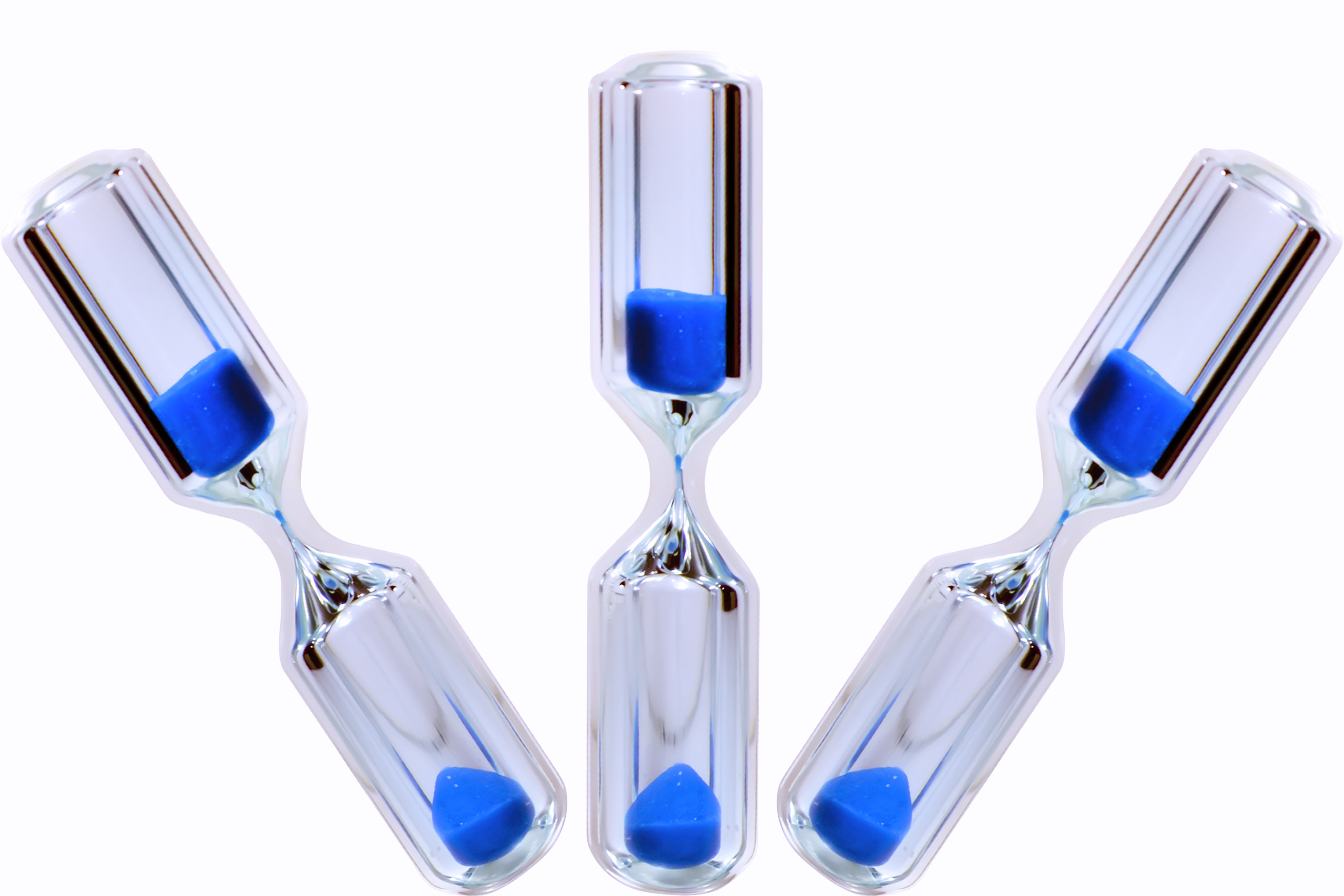 All exhalations are not the same when it comes to testing fractional exhaled nitric oxide (FeNO). The 10-second recommendation in the 2005 technical guidelines from the American Thoracic Society (ATS) and European Respiratory Society (ERS)1 on how to measure this biomarker stems from the need to achieve a steady plateau in order for FeNO to be reliably and accurately measured. The time taken to reach a steady state FeNO plateau can be affected by two parameters in particular, (i) nitric oxide (NO) inhaled during the initial inhalation phase, which can trigger an early exhaled NO peak and (ii) exhalation flow rate due to the NO diffusion in the airway. Although some devices do not require a 10-second measurement to ensure a plateau is reached and may use algorithms to estimate the FeNO value earlier in the exhaled breath sample, these approaches do not meet the recommended ATS/ERS standardised guidelines and could result in incorrect FeNO measurements. As such, it is advisable to use a FeNO measurement device that will remove NO from the patient’s breath sample before the exhalation and analysis begin so only NO-free air is tested.


What is a FeNO plateau?

The figure below shows the relationship between NO concentration in parts per billion (ppb) over time when the same patient performs three independent exhalations at a constant flow rate and back pressure to ensure velum closure. A stable expiration flow rate produces a constant respiratory NO distribution curve and a steady plateau from each exhalation curve. 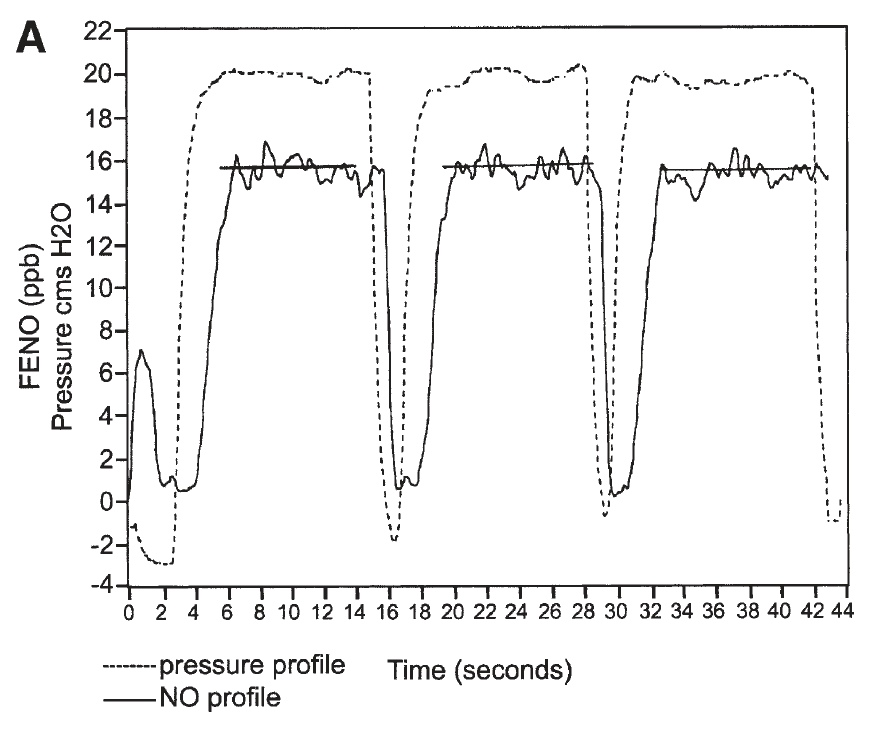 What do the recommendations say?

The ATS/ERS recommendations state that it is preferable to remove ambient NO during the FeNO testing process to avoid an early NO peak; that patients should exhale at a constant flow rate to achieve good measurement sensitivity; and that nasal contamination should be removed from the measurement.

In addition, the duration of the exhalation must be long enough to achieve a stable plateau of NO in any sample of breath being tested, which equates to at least six seconds for patients over 12 and at least four seconds for younger children. This corresponds to an exhaled volume of at least 0.3L in adults at an exhalation flow rate of 0.05L/s to allow reliable and repeatable NO to be generated from the airways and the plateau to be achieved. The FeNO value is calculated by measuring the NO concentration from the plateau. Patients are generally comfortable exhaling for 10 seconds, whilst longer exhalations may be difficult to sustain, particularly for patients with severely reduced lung function.

How can FeNO be reliably detected?

Inhaling high concentrations of ambient NO will cause an initial peak in the measured NO signal, therefore it is preferable that FeNO measurement devices remove ambient NO from the sample so that NO-free gas is inhaled. This will ensure that the NO detected during the test has come from the patient’s airways and that the sample was not contaminated with ambient NO. Figure C below from the ATS/ERS recommendations illustrates the potential problem.

The figure shows the concentration of NO and airway pressure over time. In the left-hand trace, NO in the inhaled breath was <5 ppb. In contrast, the right-hand trace shows an early peak, which was generated by asking the patient to inhale nasally (the nasal cavity is naturally very high in NO). The conducting airways were filled with NO, which was then exhaled. Once the early peak has washed out, we can see that the NO plateau is the same in both traces. 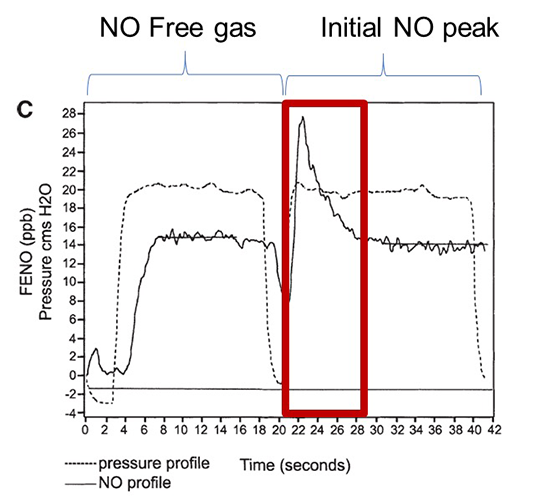 Ambient NO can reach high levels (up to 500 ppb), which can affect the FeNO level measured in a patient’s breath.2,3 Not knowing the concentration of NO in your patient’s inhaled breath also means the time required to enter the plateau phase cannot be established and the sampling time cannot be easily determined. These factors may lead to inaccurate FeNO results and are what make the ATS/ERS suggestion that it is preferable to remove ambient NO from breath samples (to <5 ppb) so important.

How does NIOX® solve the problem?

NIOX VERO® meets all three ATS/ERS recommendations: (i) removing ambient NO to avoid an early NO peak is preferable, (ii) exhaling at a constant flow rate to achieve good measurement sensitivity whilst ensuring patients can successfully complete the measurement and (iii) removing nasal contamination from the measurement.

NIOX VERO® requires patients to first exhale the residual air in their lungs, and then inhale into the device to avoid contamination of the test sample with ambient NO. To do this, NIOX® technology includes a scrubber within the breathing handle which clears ambient NO from the breath to <5 ppb. These vital steps mean testing FeNO with NIOX ® ensures there is no initial NO peak in the sample.

To ensure accuracy and repeatability of results, the FeNO detection process in the adult 10-second mode of the NIOX VERO® requires patients to maintain an exhalation flow rate of 0.05L/s (+/- 10%) for 10 seconds. NIOX® contains a unique Flow Rate Control mechanism to achieve this and guides the patient with clinically validated animations and coordinated sound to allow the patient to adjust the exhalation manoeuvre in real-time until the 10-second measurement is completed. In parallel, the NIOX VERO® device is ensuring the patient velum is closed throughout the exhalation manoeuvre through a pressure feedback mechanism.

Exhaled NO levels are convenient and straightforward to monitor at the point-of-care with a commercially available analyser like NIOX VERO®. You can learn more at niox.com or contact us directly to see a NIOX VERO® for yourself using the details or form below:

Over 40 million tests have been performed using NIOX® technology. For more information on how FeNO testing can aid asthma management, please see our website niox.com or contact us directly with any questions:

FeNO for the diagnosis of asthma in adults: Friend or foe?

1. American Thoracic Society; European Respiratory Society. ATS/ERS recommendations for standardized procedures for the online and offline measurement of exhaled lower respiratory nitric oxide and nasal nitric oxide. Am J Respir Crit Care Med. 2005;171(8):912-30.
2. Clapp LJ, Jenkin ME. Analysis of the relationship between ambient levels of O3, NO2 and NO as a function of NOx in the UK. Atmos Environ. 2001;35(36):6391-6405.
3. Corradi M et al. Influence of atmospheric nitric oxide concentration on the measurement of nitric oxide in exhaled air. Thorax. 1998;53(8):673-6.