FeNO values are used to indicate the likelihood that a patient has airway inflammation, a key characteristic of asthma. Knowing a patient’s FeNO level can help diagnose asthma more accurately, as well as improve patient outcomes over time. This article looks at interpreting results into meaningful data for patient care and savings for healthcare budgets.

Testing fractional exhaled nitric oxide (FeNO) is the most convenient way to assess airway inflammation at the point-of-care. Performing a FeNO test with a device like the NIOX VERO® is simple, immediate, and non-invasive. Each test results in a single number, indicating the level of airway inflammation – and the likelihood of asthma – in one FeNO value.

In the early 2000s, FeNO began to be used to diagnose and manage asthma. In 2005, the American Thoracic Society (ATS) and the European Respiratory Society (ERS) jointly published recommendations for standardised FeNO testing procedures.1 The ATS published its first FeNO guidelines in 2011, with clear direction on how to interpret FeNO levels with distinct cut-off points.2

The ATS guidelines were based on a systematic review of numerous publications. 83% of subjects enrolled in the studies from which the ATS cut-off points were derived used NIOX technology to perform FeNO testing.3 As such, NIOX VERO® may be more reflective of the established ATS FeNO cut-off values, which remain the most used worldwide.4

The ATS-defined FeNO cut-off points are as follows:

The ATS uses the cut-off points above to indicate the likelihood of responsiveness to anti-inflammatory treatment such as corticosteroids. Low FeNO is associated with a low likelihood of airway inflammation and therefore a reduced expectation of responsiveness. High FeNO, on the other hand, means airway inflammation is present and responsiveness to corticosteroids would be likely. Where FeNO values fall in between, the ATS recommends interpreting the patient's results within the clinical context for a fuller picture. 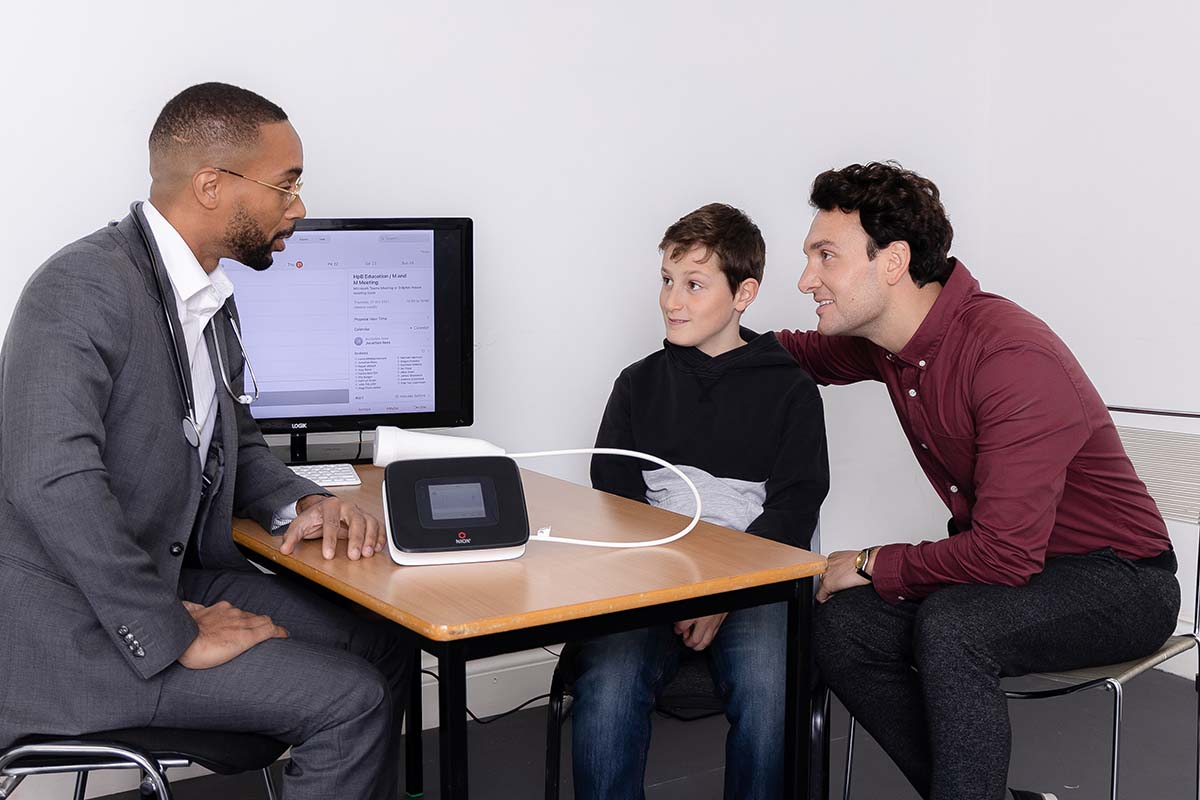 A doctor explaining how the NIOX VERO® works before a test

Some countries have produced guidelines with a single cut-off point instead of a range. The UK's National Institute for Health and Care Excellence (NICE), for example, uses 40 ppb (35 ppb in children) as the unique cut-off to support an asthma diagnosis, although it also has statements about FeNO levels of 25-39 ppb.5

Airway inflammation is a key characteristic of asthma and assessing its severity with FeNO testing can help to achieve more accurate diagnosis. When FeNO is 40 ppb or more, a patient is seven times more likely to have asthma.6

Once a diagnosis has been confirmed, it is crucial to consider the variation in FeNO results between visits, instead of strict thresholds. This variation should be included as part of ongoing asthma management.

Even patients whose asthma appears to be controlled may have airway inflammation.7 High FeNO is associated with a four times greater risk of potentially severe asthma exacerbations.8 An elevated FeNO result can open up conversation with patients about inhaler technique and adherence or guide physicians in titrating corticosteroid dosage. Optimising medication adherence and therapy using FeNO has been shown to help reduce exacerbations by up to 50%.9

FeNO-guided asthma management not only helps to improve outcomes for patients but is also associated with reduced costs as medication is optimised and unscheduled visits to the doctor or admissions to hospital are reduced or avoided.10

Some factors can influence FeNO levels. Particularly, FeNO testing should always be performed prior to spirometry because of a potential and temporary reduction of FeNO.1 In addition, there are other influencing factors. Although they are not usually clinically significant, it is recommended that patients avoid food, drink, exercise and smoking before testing FeNO.2

Today, over 40 million tests have been performed using a NIOX® device. For more information on how FeNO testing can aid asthma management, please visit niox.com or contact us directly: