A review of national and international guidelines for
FeNO testing

FeNO testing has really gained traction over the last five years and thousands of physicians use it every day to improve patient outcomes. Most national and international societies recognise the value of FeNO testing to help achieve more accurate diagnosis and better asthma management, and now include FeNO in their recommendations. The American Thoracic Society, the European Respiratory Society, the Global Initiative for Asthma, the National Heart, Lung, and Blood Institute in the US and the National Institute for Health and Care Excellence in the UK have recently updated their guidelines. This article provides a helpful overview of the main recommendations on FeNO testing.

Many studies have shown that FeNO testing can help rule in or rule out an asthma diagnosis, predict inhaled corticosteroid (ICS) responsiveness, optimise therapy, uncover non-adherence and reduce exacerbations by up to 50%, all by accurately assessing airway inflammation at the point-of-care.1 Therefore, it is important to measure FeNO levels correctly and interpret the results with care. Recently updated guidelines aim to guide healthcare professionals through this process.

FeNO in the guidelines

Nowadays, most guidelines recognise the added value of FeNO testing within asthma diagnosis and management.

The American Thoracic Society (ATS) was the first to recognise the broad range of clinical benefits of FeNO testing in 20112 and set up widely used cut-off points for the interpretation of results. Low FeNO values (≤25 ppb for adults, ≤20 ppb for children under 12) indicate that Type 2 inflammation and responsiveness to corticosteroid treatment is unlikely. High FeNO levels (≥50 ppb for adults, ≥35 ppb for children under 12) point in the opposite direction, suggesting that Type 2 inflammation and responsiveness to corticosteroids is likely. The ATS strongly recommends that healthcare professionals use FeNO testing to diagnose Type 2 inflammation and predict the likelihood of steroid responsiveness. It also strongly recommends performing regular FeNO tests in asthma patients to monitor their airway inflammation levels. In 2021, the ATS published a new guideline, recommending that FeNO testing should be incorporated in usual care when treating asthma patients.3

In 2021 and 2022, the European Respiratory Society (ERS) published its first guidelines on the diagnosis of asthma in children and adults. Professor Erol Gaillard led the work on the paediatric guideline and the group agreed to recommend FeNO testing as a first-line test to diagnose asthma in children.4 In the adult guideline, led by Professor Renaud Louis, FeNO testing is recommended as part of the diagnostic work-up if there is uncertainty after spirometry and bronchodilator reversibility testing.5 The ERS has not yet released guidelines on the management of mild-to-moderate asthma, but did publish a joint guideline with the ATS in 2020, recommending the use of FeNO in severe asthma to identify patients appropriate for biologic treatment, as well as to select the right biologic.6

The NG80 guideline, published by the UK’s National Institute for Health and Care Excellence (NICE) in 2017, also focused on the diagnosis of asthma.7 Its recommendations are very similar to those of the ERS. NICE recommends performing FeNO testing in all adults when a diagnosis of asthma is suspected, and suggests considering FeNO testing in children (5 to 17 years old) if the diagnosis is still uncertain after initial assessment. NICE also suggests using FeNO testing to manage patients who are symptomatic despite ICS. The institute recommends using 40 ppb as a single cut-off to determine the likelihood of airway inflammation.

In the US in 2020, the National Heart, Lung, and Blood Institute (NHLBI) published a focused update to its asthma guidelines from 2007.8 This update addresses six important areas, including FeNO testing. The NHLBI recommends adding FeNO testing to the diagnostic work-up in both adults and children if the diagnosis of asthma is uncertain after initial assessment or if spirometry cannot be performed. The group also recognised the value of FeNO testing in asthma management, and recommends FeNO testing to help choose and manage ICS therapy. 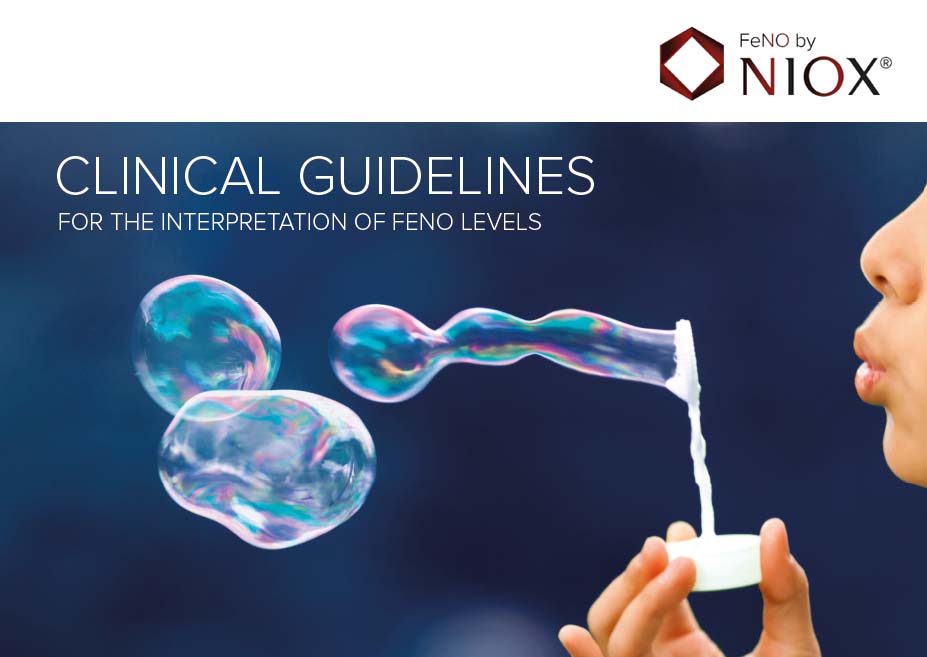 NIOX® Clinical Guidelines for the Interpretation of FeNO.

The Global Initiative for Asthma (GINA) has been including FeNO testing in its guidelines for many years, especially in the severe asthma treatment algorithm.9 GINA lists FeNO as one of the biomarkers that can be used to assess the severe asthma phenotype. In addition, GINA recognises FeNO as a predictor of good response to certain biologics: FeNO levels greater than 20 ppb indicate a good response to omalizumab (anti-IgE) and levels greater than 25 ppb suggest a patient will respond well to dupilumab (anti-IL-4R).

The role of NIOX® in the creation of the guidelines

NIOX® has been the FeNO technology of choice in the vast majority of clinical studies since its invention in 1999. Therefore the recommendations in the guidelines come mainly from studies where NIOX® devices were used to obtain patients’ FeNO values. For instance, in the studies analysed by the ATS to define the widely used cut-off points of 25 ppb and 50 ppb, 83% of the patients used NIOX® devices to perform FeNO testing.10

Today, NIOX VERO® is the gold standard FeNO testing device, proven to be accurate, reliable and straightforward, and a great companion as you implement the guideline recommendations in your clinical practice.

Today, over 40 million tests have been performed using a NIOX® device. For more information on how FeNO testing can aid asthma management, contact us directly with any questions you may have: