The colder months of the year see many asthmatics experience a worsening in their symptoms as autumn and winter bring a rush of triggers. From cold air outside to central heating within, this time can be a minefield for asthma patients and regular monitoring is essential. This article looks at how FeNO (fractional exhaled nitric oxide) can help with asthma management as we head towards the peak of the cough and cold spell.

The colder months come hot on the heels of “back-to-school asthma season”, when the return of children to one confined space brings germs into wider circulation, increasing colds and flu and of course, generating asthma symptoms.

According to a 2019 study cited in the British Medical Journal, while visits to the family doctor go down over the warmer months, with children away from school and spending more time outside, back-to-school asthma is linked to a three-fold increase in appointments. For the Northern Hemisphere, this increase reaches its height a few weeks into each of the autumn half-terms in September and November.1 Indeed, a study published by Larsen et al states that “the 38th week” is consistently the worst in the year for asthma-related visits to the emergency department. In the Southern Hemisphere, the peak occurs in February, following the return from the January summer holidays.2

GINA, the Global Initiative for Asthma, also recognises the problem, noting higher exacerbation rates during seasonal changes and the autumn return to school, even in patients whose asthma symptoms are considered mild or well-controlled.3 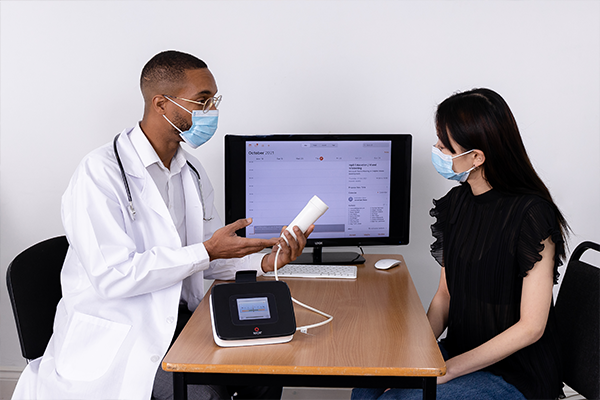 A General Practioner explaining how the NIOX VERO® works before a test.

Multiple factors are believed to be involved in the seasonal jumps, including the stress of returning to school, changes in the weather, pollution and of course the rise in circulating infections, such as rhinovirus and respiratory syncytial virus.2

Controlling the spread of viruses through the simple action of thorough handwashing is highly beneficial and reminders are useful in patient management. The end of summer and progression through autumn is also a good time to prompt patients about the importance of inhaler technique and taking their medication regularly. Adherence is thought to drop significantly during the summer holidays.2,4

Using FeNO to reduce the risk

Monitoring adherence and checking inhaled corticosteroid dosage is straightforward with FeNO-guided asthma management.5 In the space of a couple of minutes, healthcare professionals can test FeNO to measure the amount of airway inflammation a patient has.

A high FeNO level means a patient is at four times the risk of potentially severe exacerbations than someone whose asthma is well controlled.6 Using FeNO testing as your asthma risk estimator can help to reduce exacerbations by up to 50% in both children and adults, and avoid unscheduled visits to the surgery.7

Exhaled NO levels are convenient and straightforward to monitor at the point-of-care with a commercially available analyser like Circassia’s NIOX VERO® device. You can learn more at niox.com or contact us directly to see a NIOX VERO® for yourself using the details or form below:

Easing the burden of pollution in paediatric asthma